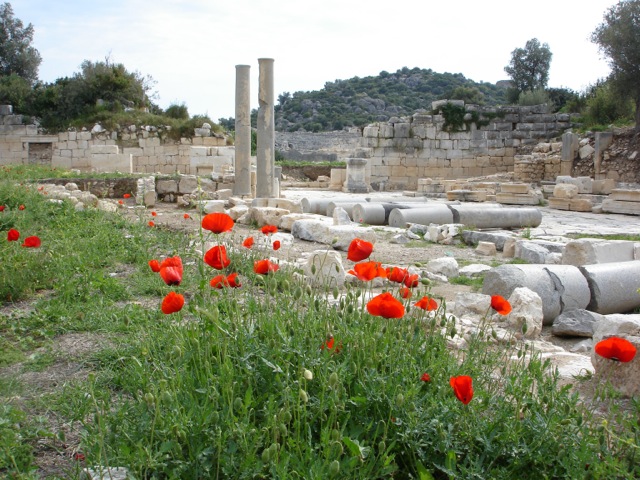 2020 has been designated the Year of Patara by President Erdoğan in a bid to both promote and honour of the importance of this ancient city. Patara was – and I suppose technically, still is – the main port city of the Lycians. Located near Kalkan at the southern end of Patara Beach, the longest beach in Turkey, its harbour was the only significantly sized safe haven on this stretch of coastline, and as a consequence Patara’s size and prosperity grew. Then, as time went by, the shifting dunes blocked this vital harbour, reducing it to a mosquito-infested swamp. The city dwindled and lost the people that kept it going, no doubt helped along by the occasional earthquake and numerous Arab pirate raids. It’s believed Patara was finally abandoned some time in the 13th century and over half a millennium of nature’s gentle touch has finally reduced it to the ruins we see today.

I’ve been visiting Patara for many years and it’s one of my most favourite places in Turkey. I always approach with a growing sense of anticipation and amazement at its grandeur and quiet dignity. This place is huge and the city ruins actually begin to appear once you reach the little village of Gelemiş. Since Patara is under the protection of the Turkish government, there is an entrance fee, currently 30tl per person, and having paid at the barrier, the road passes through a substantial necropolis of excavated tombs before approaching the first major monument, the triumphal arch of Mettius Modestus, the city’s impressive three-arched main entrance gate. Also at this end of the site are the Palm Baths, named for the nearby grove of magnificent palm trees, without doubt some of the largest I’ve ever seen.

As you drive further on into the site, a large number of skeletal grey-stoned buildings dot the valley floor. To the right, the silted up harbour, once the lifeblood of the city, has dwindled to a reedy marsh-fringed lake. Several structures can be seen on the far bank, notably the impressive granary of Hadrian. That’s the same Hadrian who built the wall we all know up Newcastle way. Must have spent a lot of time in the saddle, that boy!

The expansive site takes a full day to examine in detail. I did so with my sister some years ago, walking in from the village and doing an ambling but continuously argumentative circuit of the harbour before walking out along the old Roman highway which runs parallel and below the current modern access road. Actually, as well as disagreeing on our interpretation of almost everything we saw, we also both suffer from vertigo and having rashly climbed a tomb near the granary, discovered the descent was at the very limits of what we could manage without having to call the itfaiye to come and rescue us! Bit of a moment there…

So, there’s plenty here to investigate, depending on your level of archaeological enthusiasm, but here’s my recommended list of must-see buildings:

The Corinthian Temple. Located near the harbour beyond the end of the main street, this small square temple is perfectly formed with an intricately carved doorway and a large tree growing in its middle.

The Bouleuterion. Beautifully restored some years ago, this council building is as historically important as you’ll find anywhere. It was here that the leaders of the Lycian League met, with each member city apportioned a number of votes to represent its interests. The league was the earliest known example of a representational democracy and was noted and admired as such by the writers of the United States constitution, who examined the system as a possible model for their own government. Yes, it really was that important – and you can pop down to Patara any time, walk into the bouletarion, stand on its glass-protected marble floor and breathe in all that remarkable history.

The Theatre. Built around the 2nd century BC and with a capacity of around 15,000, this grand structure was finally liberated from the sands in 2002. Standing adjacent to the bouletarion and very recently renovated, it is now concert ready. The stage and orchestra have new panelled flooring, there are safety rails on the stairs and some chunky steel supports to stabilize one of the massive end walls. More musical concerts are planned, subject to Covid, of course.

The Main Street. A wide, colonnaded street, complete with camber and drains. In a nod to 2nd century BC health and safety, many of the flagstones have been dimpled with chisels to create a non-slip surface in the rain. How considerate is that. Lined by columns, the street dips down beneath the water table, but recent restoration work now means the far end should remain dry. This was once a commercial hub lined with shops and businesses, including a brothel. How can you tell? Well, there’s an eye-wateringly large, unfeasibly jaunty rock-cut phallus ‘pointing’ the way to an evening of paid-for pleasure.

The Lighthouse. The most important project at the moment is the restoration of the lighthouse. Originally located at the entrance to the harbour, the lighthouse now sits far from the sea in a shifting sea of dunes. The structure succumbed to earthquakes and the fallen stones were eventually covered by the ever-moving sands. This was not a bad thing as it turned out, because the lighthouse masonry remained protected for centuries before excavations uncovered the stones once again, and now the lighthouse is in the process of being reconstructed to its former glory.

Commissioned by the Roman Emperor Nero in AD 54, the lighthouse incorporates a circular stair to allow access to the fire chamber at its crown. Standing 24 metres in height, it is 60 years older than the Tower of Hercules in Corunna, Spain, and so when fully restored will be the oldest working lighthouse in the world.

So, Patara not only contains the oldest lighthouse on the planet but also the building where the first ever democracy flourished. Well worth a visit, don’t you think, even if you’re only dropping in for a quick peep while on your way to the beach.

A word on when to visit. Although open all year round, unless you have a particular fetish for wobbling around in perspiration-soaked clothing with your eyelashes weighed down by droplets of sweat, it’s probably best not to visit the site in the peak summer months. The place is a furnace. Literally! All that masonry reflects and amplifies the heat. I visited with friends a few weeks ago and I can honestly say it was so unpleasantly hot we had to curtail our visit. Drinking lots of water made no impact. Every square inch of my body was leaking uncontrollably. In fact, I got a bit light-headed as I staggered back to the car. We were planning to walk the kilometre or so out to the lighthouse to see what was going on, but this was obviously way beyond our physical capabilities and so we had to reluctantly give it a miss. When we got back to the car, I burnt my hand on the seat belt buckle. Never have I been in the company of such flushed, neon-hued companions.

There’s a new colour on the block – and it’s Patara Pink! 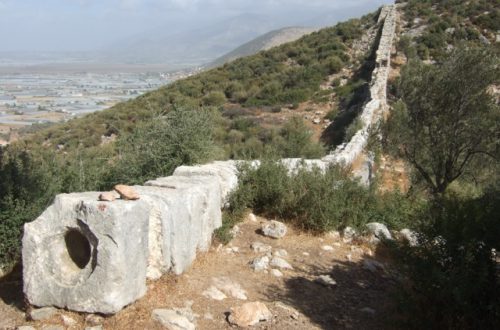 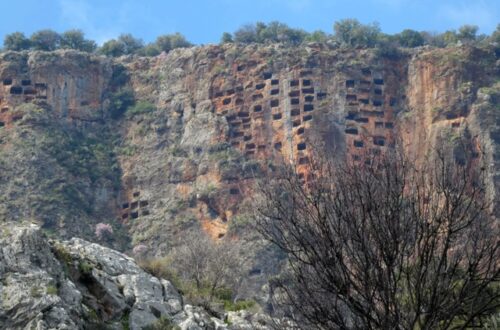