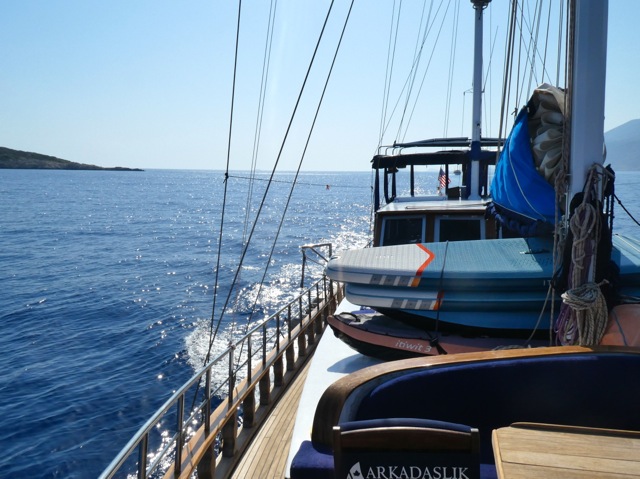 Feature Photo above: Cruising between the islands near Kaş

Do you know the perfect remedy to counter the disappointment of having your third set of flights back to the UK cancelled due to Covid? While you’re all considering your own personal answers – and please keep the language clean – I can tell you that for Jan and I, a gulet cruise just about comes top of the list.

For those who have not heard of a gulet, it is a traditionally designed wooden boat designed to cruise up and down the Turkish coast, and although they all have masts, most run under engine power. Guests sleep in private cabins with compact en-suite bathrooms, but almost all your time onboard is spent up on deck sitting in the shade, sunbathing or thinking about your next cooling dip in the sea, and when the heat of summer really kicks in, many prefer to sleep on deck under the stars. Yes, cruising by gulet is, without doubt, one of the most enjoyable ways of travelling.

When our friends, Steve and Christine, suggested we join them on a cruise from Fethiye down to Kekova and back, we did not hesitate. We’ve been on a gulet before, that time celebrating my 60th birthday some 6 years ago, which, as Albert Einstein will assure you, makes me 43 years old. Oddly enough, that trip was in the opposite direction, sailing from Kekova to Fethiye, so we’re familiar with this type of voyage, and I can say with conviction that if you haven’t yet experienced a gulet cruise, then stick one at the top of your to-do list right away.

Welcomed aboard by Sue and Captain Oktay, we joined the Arkadaşlik in Fethiye harbour and met our other fellow passengers, local residents and friends, Donna and Alison. In addition to Sue and Oktay, the crew comprised Ozan the chef, Murat the sailor and apprentice Mustafa, still very much learning the ropes but super keen and studious in his tasks. We liked them all immediately, especially young Mustafa, who took great care in all his tasks, including laying the table for every meal.

Arkadaşlik is equipped with four air-conditioned cabins, each with an en-suite comprising a shower, wash basin and a traditionally enthusiastic marine toilet. Steve and Chris took one cabin, leaving Alison and Donna with a cabin each. The common areas comprised a salon with bar and outside, a large shady canopied dining area at the stern with plenty of comfy seating. There is room for sunbathing forward and the boat is also equipped with a small inflatable dinghy powered by an outboard motor, used to assist in mooring and to take guests ashore.

Our first stop was Tarzan Bay on the Fethiye peninsula where we anchored waiting for a rather lively wind to subside. Once it did, we moved around to near Gemiler Island, where we spent the first night. The following morning saw us off with a very early dawn start for the long and steady haul down the coast past Kabak, Yediburunlar and Patara, where I was interested to see how far the renovation of the ancient lighthouse had progressed. I can report that although the tower crane is still on site, there is as yet no sign of the lighthouse rising above the foliage.

We moored for the night in a quiet bay just outside Kalkan and the next morning, cruised on past Kaputaş Beach and down to Kaş. We’ve driven that Kalkan to Kaş corniche road many times and always love the wonderful panoramas out to sea, so it was a pleasant change to reverse the views and see the mountains towering above the distant thin line of the road.

We went ashore at Kaş and spend a few hours enjoying the town. I’d have really liked to say I leapt with gazelle-like grace from the ladder down the side of the boat and into the gently bobbing dinghy before settling back with all the flair and panache of a Hollywood movie star, but you all know I’d be lying. Journalistic integrity compels me to tell the truth. There were wobbles, some more undignified than others. Let’s leave it at that. At least nobody fell into the sea, so I call that a result. I could kid you my performance improved as the cruise went on but again, we’d be straying straight back into Pinocchio territory.

After an overnight stop in a sheltered bay opposite the town, we threaded through the small islands past Meis and headed on towards Kekova, stopping at a lovely little bay on the way blessed with one of the smallest and shortest ravines I’ve ever seen, at the head of which was a secret sandy beach no more than five or six yards wide.

At this point, let me spend a moment talking about the onboard catering. Many gulets are noted for their sumptuous catering and Arkadaşlik is no exception. Apart from his not-too-shabby skills in the dinghy, Ozan’s catering was consistently delicious, from full serpme köy kahvaltı style breakfasts every morning to lovely lunches and delicious evening meals, plus daily afternoon tea with freshly-baked cake hot from the oven. By the end of the week, I swear the boat heeled over every time I came up on deck!

Later in the day we cruised along the seaward side of Kekova Island and in the early evening moored in Karaloz Bay, a sheltered fjord-like inlet surrounded by high hills. This was the one mooring where there was absolutely no light pollution and the night sky was spectacular – there are few things more stunning than peering up at a sky sparkling with thousands of stars.

Next to visit after departing Karaloz the following morning was the ancient site of Andriake, the port of Myra. With Sue as our guide, Steve, Chris and I flashed our museum cards at the booth and were waved into the site. I’ve not visited Andriake before and was delighted to find a fully restored underground water cistern of significant size. Not only was it an impressive piece of engineering, but also a welcoming dark and cool place perfect for escaping the broiling heat.

What had really lured us here was the recent opening of a new museum inside the completely renovated Roman granary, an eight-room structure of significant size. Sadly, the temperatures by now were exhausting and we quickly began to suffer from museum fatigue, spending twenty minutes in the first room, ten minutes in the second, five in the third, two minutes in the fourth and no more than a cursory glance in each of the last few rooms. Ah, well…

Once back aboard, we pootled off to Kalekoy, arriving just as evening began to fall. This lovely unspoiled village is without doubt one of the most picturesque seaside spots we’ve ever seen and can only be reached by foot or boat. There’s no road and long may it stay that way, with the whole area heavily protected from new development. Our dinner was taken with this backdrop, the scattered lights giving the village a lovely romantic air.

We all went ashore the next day and scattered in various directions. Keen to use my new museum card again, I joined Sue, Donna, Alison and Chris for a visit to the impressive castle that overlooks Kalekoy and gives the village it’s name. It has been a very long time since I last panted my way up those steep stone stairs, but the views from the top are simply stunning. God, was it hot! Donna and Alison wisely retreated early and we met up again for a cooling drink before returning to the boat.

This area is a very popular spot for visiting day boats from Demre and Kaş and the village was becoming busy when we slipped anchor and headed across the bay to cruise over the submerged ruins of Kekova sunken city before mooring back at Üçağiz to take on water, and for once, we were able to disembark using the gangplank.

Although very close to Kalekoy, Üçağiz is larger and busier than its neighbour. I’m hazarding a guess here and suspect this is because it has road access, and there was plenty going on, with excursion boats loading and unloading visitors from coaches. We had a walk around, browsed a few shops and had a drink overlooking the harbour, all the things you do when you’re on holiday.

We moored overnight in a nearby bay made narrow and dramatic by towering cliffs on all sides. Oktay reversed in, his skills being appraised by a herd of appreciative goats perched overhead on impossibly tiny ledges. I’m in awe of goats and their superb skills of balance – I can’t even wear Cuban heels without getting giddy!

By now we were definitely on the return leg and faced the long voyage back north past Kaş, Kalkan and Patara, but a planned early start was delayed by two hours because of fierce winds. Thankfully, when we did finally set off, the winds had abated and the sea was agreeably calm.

Eventually, after a brief pass of Butterfly Valley, we pulled in at Gemiler, allowing those of us not fazed by excessive perspiration to visit the extensive ecclesiastical ruins that cover the island. Our final mooring saw us return to Tarzan Bay in preparation for disembarking the following morning. We weren’t the only ones – the place was packed with gulets. Ozan conjured up a final supper as delicious as any we’d had on our voyage, and we woke the following morning to find virtually every boat around us had already sailed.

After breakfast, Oktay guided Arkadaşlik back into Fethiye harbour, where we encountered most of the boats that had sailed earlier, all jostling for anchorages left vacant by departing day boats. It was like Piccadilly Circus – but with a lot more more ropes and propellers! After such an amazing and relaxing cruise, it was a timely reminder of the cheerful chaos we often encounter in Turkey and was a sight to behold.

To conclude, gulet cruising is a truly delightful experience. Life on board Arkadaşlik was pretty relaxed, with a lot of lounging around interspersed with the occasional snooze and a cooling swim or two at each stop. It was lovely to be out on the sea in this splendid wooden boat, the engine rumbling in the background and the bow dipping into the waves. Occasionally, due to the ever-present unpredictability of the sea, it’s really dipping into the waves, but that’s fine and all part of the experience. To compensate, the company was great, the food’s absolutely delicious, the scenery downright gorgeous and the turquoise sea balmy and refreshing.

We had a ball!

Note: We would like to thank Sue and Oktay at Arkadaslik Yachting for a wonderful week’s cruising along one of the most beautiful coastlines you’ll find anywhere. Sue could not have been more helpful, both in the planning stages and during the voyage itself. She even acted as a very knowledgeable tour guide on our shore trips. Captain Oktay and his crew were exemplary, offering service with a ready smile, courtesy, superb food and, for me personally, a welcoming steady hand when transferring from gulet to dinghy! Thanks, guys, you were all great.

As guests, all you really need to bring are suitable clothes and personal toiletries. Everything else is provided, including Wifi, bath and swimming towels, snorkels, and for those with more energy than I’ve ever had in my entire life, kayaks and paddle boards. It will come as no surprise to you that we all stuck to bobbin’ with the noodles. 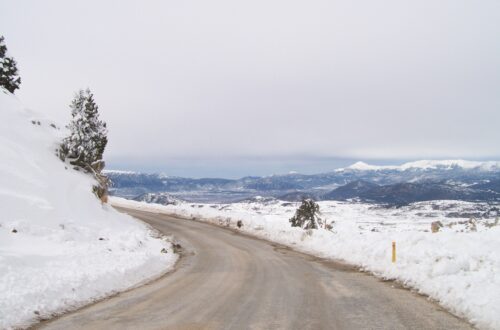 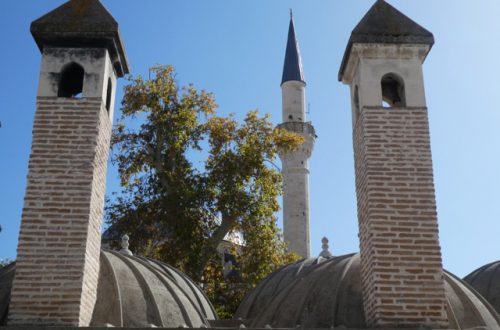 Elmali – A Town Of Mountains And Apples 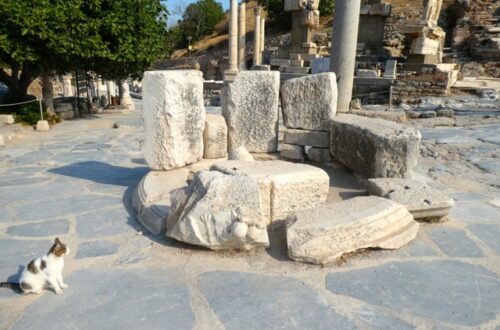